The Komodo Class started life as an auxiliary ship in the Independent Planets Navy. They served the critical role of resupply and repair, principally for the Independents fleet of Firefly Class transport ship Gunboats, which were in turn the backbone of the Browncoats air and space power. At least until the Union of Allied Planets developed their Alliance Fast Attack Ship, the combination of the Komodo and the gunboats gave the Independents superiority in the skies over many contested worlds.

These ships also saw service in the transport of high-value leadership and special forces, and as an evac craft attached to larger medical frigates. A much fancier (and far more expensive) percursor to the Komodo existed before the war. After the war began, the Independents’ General Armitage (who had owned one of those luxury models) commissioned Ballestra Shipworks, the company making that ship, to alter the design for military use: More bunks, reinforced hulls, cheaper reactor and thrusters, etc. The result was the Komodo, a ship that had all the elegance, comfort and performance Ballestra was known for, wrapped up in a combat-ready package.

The Komodo hasn’t been in production since the end of the war. Unlike the Firefly Gunboats, which were considered too dangerous to allow into civilian hands, the Komodo Class ships were converted – mostly by removing the forward and rear gun turrets – and sold off. There aren’t many of these agile ships left in service, but the captains lucky enough to own one treasure them for their flexible design and rugged reliability. Today’s Komodo Class Mid-Bulk Transports come equipped with Bixie Jiāngù D08 drives, 2 shuttles and space for 7-8 crew plus two passengers. 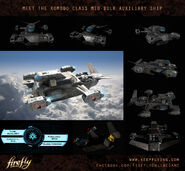 The Komodo Class
Add a photo to this gallery

Retrieved from "https://firefly.fandom.com/wiki/Komodo_Class?oldid=22825"
Community content is available under CC-BY-SA unless otherwise noted.