This past weekend, thanks to Wikia, I had the opportunity to attend the Wizard World comic convention in Nashville, Tennessee. It was a lot of fun and one of the great things was a panel featuring Adam Baldwin (Jayne Cobb) and Jewel Staite (Kaywinnet Lee Frye). Thanks to the VIP access I was given, I got to sit in the front row - I was just a few feet away from these wonderful stars of Firefly, Serenity and other wonderful shows and movies as well. Nathan Fillion was originally listed for the convention as well, but unfortunately couldn't make it.

At the beginning of the panel, Staite was congratulated. For those might have missed the news, she and her boyfriend are expecting a baby boy. The topic was, of course, floated of whether there's any chance of the series being revived, given how many people still remember it fondly and with so few episodes and the movie, there was limited opportunity for character growth. It was said that it's not likely, though, due to the fact that they'd have to get all the cast back together and also that Whedon wouldn't want to sully the memory of the series, which stands nicely as it is. Another question concerned any pranks that may have happened on the set. It was said that Nathan Fillion was quite the practical joker, though one wonders how that question might have gone differently if Fillion himself had been able to make the show. There were a few quips at Fillion's expense, for example, that it's not worth it to try to get him back for such pranks, and that if you meet him at the convention, you should always grab him around the waist, because he hates that. 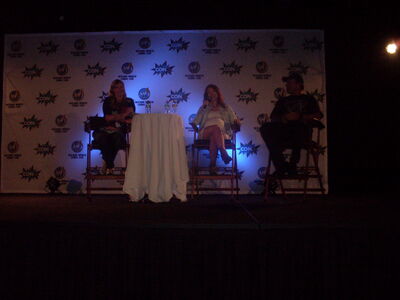 One question involved whether or not any of the cast took items from the set once the show had wrapped. They noted that there were very strict rules in place about that sort of thing, many of which were ignored. Staite said that being young and naive, she was very concerned about these rules and therefore didn't take anything, but ended up many years later receiving some Kaylee-related items that Fillion "generously gave" to her, which she quickly donated for charity. Baldwin similarly took some items which he too gave to charity. Another question was about whether or not they would want to play another character on the series if given the chance. Staite's response was that at first she would always answer that, no, her own character was the best. Over time, however, she came to feel that she really would have loved to play the captain, as the captain is the best character. Baldwin, however, seemed pretty satisfied that Jayne was the coolest character to play.

During the panel, it was noted that there were a number of fans in the audience wearing the famous "Jayne hat" and it was suggested that they should all come up at the end of the panel for a group photo op. Later, Jewel Staite mentioned that she had "found Waldo," and so all of those wearing Waldo costumes were invited for this as well. Here's a look at that: 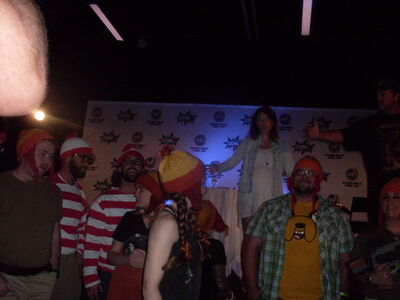 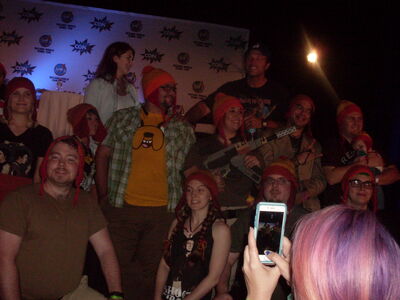 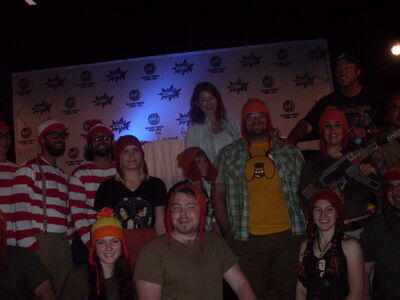 Overall, it was a very fun time, and for those that ever have the chance to attend something like this and would be interested, I definitely recommend it. For those that want to read more about my experience, I've posted another blog at the Star Wars Fans Wiki, which you can find here and there'll be more coming soon. I'll post links to that in the comments here as those are posted. I'm also willing to share more photos if anyone asks.

Retrieved from "https://firefly.fandom.com/wiki/User_blog:ProfessorTofty/Wizard_World_Nashville_Panel_with_Adam_Baldwin_%26_Jewel_Staite?oldid=22097"
Community content is available under CC-BY-SA unless otherwise noted.